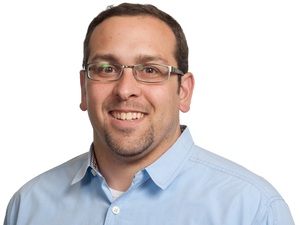 Dr. Joe Milanovich
Joe is an Associate Professor in the Department of Biology at Loyola University Chicago.  He received his Bachelors from Adrian College, his Masters from Arkansas State University (working in Dr. Stan Trauth's lab) and Ph.D. from the University of Georgia (working in Dr. John Maerz's lab). From 2010 to 2013 Joe was a National Research Council Postdoctoral Associate at the U.S. Environmental Protection Agency in Cincinnati working under Dr. Matt Hopton, and in August 2013 he joined the faculty at LUC.  Joe teaches Ecology and his research examines the impact of global change on amphibian distributions, the impact of urbanization on the stoichiometry and stable isotope compositions of food webs, and the importance of herpetofauna to nutrient cycling and storage in terrestrial and aquatic ecosystems.  ﻿See Joe's CV﻿ here﻿﻿.
Follow @amplexus_lab
Current Lab Members
Graduate Students 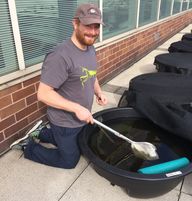 Mike Vosburgh
Mike is a M.S. student in Biology who graduated from Oregon State University.  Mike previously
worked for Michigan Tech Research Institute, USGS, and Semper Fi Land Services conducting a
number of ecological projects.  Mike will be leading our mesocosm and terrestrial pen work
​ involving the influence of nutrient and fungicide additions on aquatic communities. 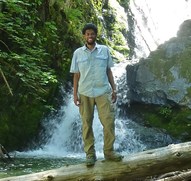 Armand Cann
Armand is a M.S. student in Biology who graduated from Xavier University in Cincinnati,
OH.  Armand comes to LUC with a wide array of field experiences working in Ohio, Kansas, the
Chihuahuan Desert (New Mexico) and California.  Armand will be leading our work investigating the
legacy effects from captive-breeding on the endangered Blanding's Turtle (Emydoidea blandingii).
Undergraduate Student Researchers

Courtney Carmack
Courtney is a senior majoring in Biology with an emphasis in Ecology and minoring
in Anthropology. She began working in our lab during the fall of 2017. Courtney is working largely
on our Golf Course Biodiversity Project. In her spare time, she enjoys playing tuba, competitively
swimming, and spending quality time with friends. 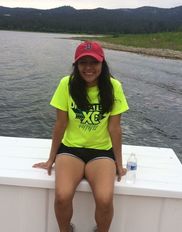 Maria Magallon-Trejo
Maria is a senior majoring in Psychology with an emphasis in pre-medicine. She began working
in our lab during the spring of 2018 under the guidance of the Achieving College Excellence (ACE)
program.  Maria is quantifying morphometrics of anurans raised under different nutrient and
pesticide treatments using our new CT scanner.  In her spare time, she enjoys running long distance,
​  hiking, working with Habitat for Humanity and working with ESL adult education classes. 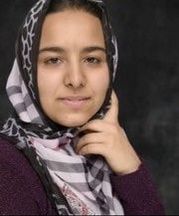 Suha Moten
Suha is a junior majoring in Molecular and Cellular Neuroscience with a minor in Computer Science.
She began working in our lab during the spring of 2018 under the guidance of the Achieving College
Excellence (ACE) program.  Suha is quantifying morphometrics of anurans raised under different
​  nutrient and pesticide treatments using our new CT scanner.  In her spare time, she enjoys playing
​  basketball, volleyball, lacrosse, tutoring, mentoring and coaching.

Joe's wife, Janice, daughter, Amira, and son, Miles
Janice, Amira, Miles, and Bo (dog) work part-time as the lab motivational speakers, among other
things.  In Janice's spare time...wait, she doesn't have any! Well, in Amira's spare time she enjoys
​   exploring all that life for a 6 year old has to offer.  Miles is happiest when playing with trucks or balls.
Lab alumni we kicked out 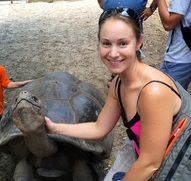 ﻿﻿Dr. Leigh Anne Harden
Leigh Anne was a postdoctoral researcher and instructor of ecology in the Department of Biology
and Milanovich Lab from 2014-2015.  She received her B.S. in Biology from Davidson College and
her Ph.D. in Marine Biology from University of North Carolina, Wilmington.  Dr. H developed several
projects within the lab, including our assessment of Blanding's Turtle and Ornate Box Turtle blood
chemistry and health, and assisted in just about everything we did!  Dr. H is now a Assistant
Professor at Benedictine University in Lisle, IL.  See more about Dr. Harden here.﻿﻿ 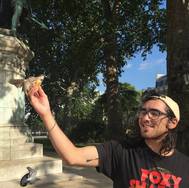 Matt Bonfitto
Matt was a M.S. student in Biology who graduated from Loyola and was advised by both
the Milanovich and Reddy labs!  Matt is from the western Chicago suburbs and came to LUC with a
passion for museum sciences.  Matt investigated 3D morphometrics and evolution of a unique
​ group of birds in Madagascar, the Malagasy Vangas, using a novel photogrammetry technique. 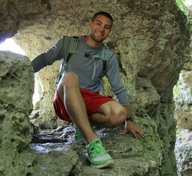 Brock Struecker
Brock is a M.S. graduate who came from Simpson College in Indianola, IA.  Brock has
extensive herpetological experience which includes conducting herp surveys for Project Orianne in
the southeastern U.S.  At LUC, Brock conducted work on Ambystoma spp. to examine their
influence on wetland ecosystems and their response to climate change.  Brock is now with Cardino
​ Environmental in Indiana!

Sarah Crites
Sarah recently graduated from LUC with a B.S. in Biology with a psychology minor.  She began work
in our lab during the fall of 2015.  Sarah investigating the function of terrestrial salamanders in
forested ecosystems and assisted heavily in the Golf Course Biodiversity Project.  Her work was
funded by the National Great Rivers Research and Education Center, the Golf Course
Biodiversity Project and the Loyola Mulcahy Research Fellowship.  Sarah is now a veterinary
​  technician at several hospitals. 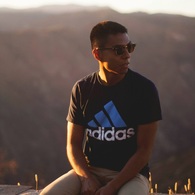 Andrés Muñoz
Andrés graduated from LUC with a B.S. in Biology with an ecology emphasis in December 2017.  He
began work in our lab during the spring of 2016.  Andrés worked primarily with our
Blanding's Turtle augmentation project and the Golf Course Biodiversity Project.  His work was
funded by the USGA and the Biology Summers and Mulcahy Loyola Research Fellowships. He is
​   now a Ph.D student at the University of Denver. 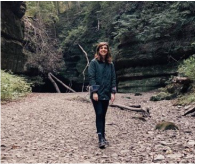 Daniella DeRose
Daniella graduated in 2017 with a major Biology with an ecology emphasis.  She began work in our
lab during the fall of 2015.  Daniella worked on the impact of invasive species on amphibian fitness
and legacy effects.  Her work was funded through the Mulcahy and Provost Loyola Research.  Fellowships. She is now at the Chicago Botanic Gardens. 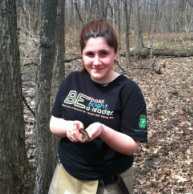 Milica Radanovic
Milica graduated in 2016 with a majors in Biology (Ecology emphasis) and Environmental Science
and  a minor in Biostatistics.  Milica led our project investigating the use of Bayesian stable isotope
mixing models to examine energy flow from invasive plants in wetlands (now published).  Her work
was funded through the Biology Research Fellows Program.  She is now off to Washington State
University to enter into a Ph.D. program in Plant Biology! 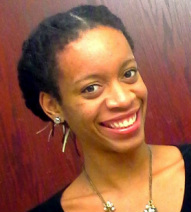 Bonita Mckinley
Bonita graduated in 2016 with a major in Biology.  Her work centered at The Field Museum where
she examined the variation (and potential causes of variation) of pigment in the peritoneum
membrane in snakes.  Her work was funded through the Mulcahy and Provost Loyola Research
Fellowships.  She is now a Data Assistant at Northwestern Memorial Hospital. 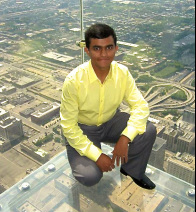 Nojan Rastegar
Nojan graduated in 2016 with a major in Biology (ecology emphasis) and a minor in Psychology.  He  investigated whether the combined effects of wetland drying and invasive species altered the fitness and morphology of anurans. His work was funded through the Biology Summers Research Fellowship.  Nojan is now in a Masters of Public Health program at St. Louis University! 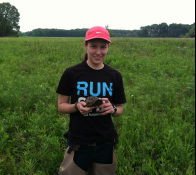 Jennifer Fernandez
Jennifer graduated in 2016 with a major in Biology.  Her interest included investigating the stress
and health of herpetofauna, so she was a natural fit for our Blanding's and Ornate box Turtle work.
She accumulated data on thousands of blood slides throughout her tenure.  Her work was funded
through the Mulcahy and Provost Loyola Research Fellowships.  Jennifer recently completed a
MAMS program at Rush University and is applying to medical school. 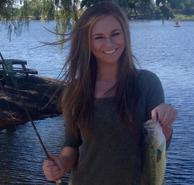 Emily Gerber
Emily graduated in 2016 with a major in Biology (Psychology/Neuroscience minors).  Emily examined the synergistic effects of climate change and invasive species on larval anurans during summer of 2015, which was funded through the National Great Rivers Research and Education Center.  Emily is now in dental school at Southern Illinois University! 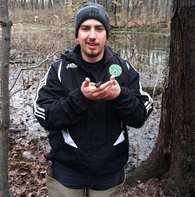 Dr. Stanislaw Warcholek
Stan graduated in spring 2015 with Biology and Biophysics degrees.  For two years in our lab, Stan
investigating a technique to determine gender of Desmognathus spp. while in a field setting and
was heavily involved in our Ornate Box Turtle project.  His work was funded by the Provost
Summer and  Mulcahy Fellowships.  Stan is now a veterinarian and a dermatology specialty intern
​   in Port Richey, FL!
Powered by